This is an archive of a consumer complaint published against Ryan Noory at DirtyScam.com-

I am a real estate investor. I was looking to set up a new office soon for which I contacted Ryan Noory. I had my own lawyer, but he was on a holiday for a month and the business was not ready to take that set back. So, I contacted Ryan and asked him to help me consultancy and paper work. The start up phase of a business is always tricky and I was not getting into any trouble.I approached Ryan and he called me for a meeting at his office. At first, he seemed okay and he suggested few things to start with. He asked for the upfront payment so that he can access the details and provide me a better overview of all the paper works and important registrations required for the start.I signed him the check. He said that he would get back to me after three days. It was a Saturday. I waited till Monday before calling him back. On Tuesday, when I got hold of him, he said that the weekends were not countable. It was so convenient for him to say so. I had things lined up and because of him I had to cancel all my appointments. He did not revert my calls and I had to visit his office to ask for the update.Being new to the city, I was not sure about whom to trust and whom not to. When Ryan did not answer, I went straight to the office. He was there with nothing much to do. He said that I should call him after one more day. He would be ready with the details.The next day, I got a message saying that he had to leave urgently for some meeting organized outstation. He said that he would come back after a week. It was so unethical. I paid him, and he was doing nothing. His phone went unreachable.After a week, I received a mail with few things. He had misspelled my business name, there were different categories mentioned for my business than what we figured out in the first meeting together. Everything in the mail was wrong and felt as if done in a haste.I sent the mail to my lawyer who was on a holiday. He took out some time and gone through the mail. He straight away told me that the lawyer was incapable, and I should not ask him for any more help.I called him to ask for a refund. But he denied. He said that I can very much opt for a different lawyer, but the fees paid was not refundable. He was arrogant and was not ready to come to any agreement. I had to leave that money to him for no reason.I later called him to understand few things that was in the email and he completely ignored my question. He is an unethical lawyer, and no one should ever trust him. Ryan Noory is a scammer and not a lawyer. 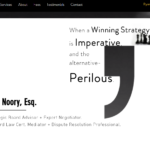