This is an archive of a consumer complaint published against Saad @ Sergeant Justin Howard at DirtyScam.com-

US military in Syria for many years.  Was there for 10 months.  Claimed to be divorced with one kid.  Wife was a drug abuser. When asked to make video calls and wasapp calls,  he mentioned that all app calls were being blocked.  Couldnt make outgoing calls too as they were not allowed to have handphones in the first place.  But he could send me a lot of pictures of himself in the army and gymnasium.  I did call him twice on his mobile phone.  He did request me to buy him iTunes gift card so that he could get his so called IT army friend to buy a calling card there so that he could call me.  But of course I didnt buy for him. When asked which army division he was in, he got angry and defensive.  He accused me of asking and talking too much and thereafter,  he blocked me from the dating site and hangouts. 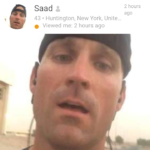