This is an archive of a consumer complaint published against Sanford Medical Center at DirtyScam.com-

My friend cut his leg Sanford Medical Center in Fargo ND put 27 stitches in they did not get all of them out he got infection then sepsis which can be fatal.He was ill and Sanford did blood tests but he got no results.I saw him 3 1/2 weeks later and he lost a great deal of weight I encouraged him to go to the Fergus Falls ER because he looked really bad they did blood tests recommended he spend the night in the hospital they think he has sepsis.The ambulance takes him to Sanford Hospital in Fargo.The first night he said he was in more pain that hes ever felt in his life he checked in around 11 pm and said the nurse was rather rude to him.I went up and stayed the next night. He had urine on his bed I changed the sheets and tossed them on the floor as there was no place to dispose of them.The nurses aides came in and walked over them 3 times going to assist the other patient in the room.The aides would come in not identify themselves or ask how the patient was doing or if they could do anything for him.One dumped the urinal and put it back on the lunch tray table with out even rinsing it- or they would rearrange the table at night and put the urinal up above the bed out of the patients reach, the call light was big and clunky no clip to clip it on the sheet by the patient so they could have access to it should they need the nurse it kept falling on the floor.When I came the next day there was a saline solution bag on the IV pole and 2 antibiotic bags 1 was empty I asked the nurse about the empty bag assuming it needed replacement- she says oh I know he does not need anymore of that the bag hangs on the pole all night.The patient had not eaten for two days and was getting hungry and though I do realize if surgery is needed you cannot eat prior to that BUT no tests were being ran to determine what the issue might be is he supposed to go without eating 2 more days??? NO answers NO communication.He was in a room with a patient that hollered all night long the first two nights- they finally removed the guy then they put my friend in a “private room because he was CONTAGIOUS  I mean WTF? I had been up to visit his 80 yr old mother an his sister not to mention his room  mate and the last TWO DAYS of his stay they determine he is contagious? HELLO INFECTION CONTROL????Note: He ended up going to the hospital after SANFORD stitched his leg- which likely caused the sepsis- Had they addressed the issues ahead of time this would have not gotten this far out of hand.He signed a release to get his medical records weeks later still did not get them.. Had to request a second time.When I inquired why his records did not go out as requested the clerk said they were requested THEN CANCELED I asked why that would be She did not know.He was told he needed the pic line for the antibiotics he will take for 6 more weeks cleaned once a week they said it was right here at SANFORD.. SO he goes back to sanford turns out its across the street my friend has a difficult time walking so this was a real struggle  some lady behind us said they told her to park in the back of the building she tried ever door on her way around  she was upset too for the lack of direct communication.NO communication- under trained staff regarding infection control- under trained staff when it comes to patient care, compassion and sensitivity training issues.I cannot believe they are building a brand new hospital up there seems to me they need to get their staff in tune- from the issues of getting back to patients with test results, how to treat your patient in the hospital, medical records how to follow through with a simple process of releasing records as signed for and requested.He wants to switch to the other hospital as the care is SO POOR at this hospital.Evidently because of whats going on with the sepsis that is not an easy task to do!IF you have a DEATH WISH go to SANFORD.. the staff needs some sensitivity training, and basic sterilization training as well as professionalism  I would not take my dog here. 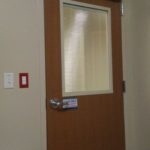