This is an archive of a consumer complaint published against Santander at DirtyScam.com-

I originally signed up for a Santander account for the free $20 a month promotion.I should have remembered that if something sounds too good to be true, it probably is.First  the tellers at all three places I used  Davis Square, Broadway in Somerville, and Central Square  were slow and not super helpful.I went there often to deposit checks because the app has no place to deposit checks that I can see. I asked the tellers. They didnt know where it could be on the app.Then I tried to deposit a check and was told it wouldnt be possible to have access to the money for at least 2-3 business days. I asked why.I was told I had to have enough money in my account before the check cleared  meaning that if I only had $100 and tried to deposit a $500 check, I couldnt access the money for 2-3 business days because I didnt already have $500.I told the teller this was the stupidest thing I ever heard. She then began talking down to me and told me all banks do this (they dont).I felt unvalued as a customer and annoyed as someone who needed access to their money, I told her I would be closing my account  after 1.5 months of being a Santander customer  because I felt she was so rude and condescending, and because other Santander interactions werent exactly stellar either.At least for the extra 20 account, everything takes fooooorever to clear or at least even show as a pending charge.This combined with the duration it takes for a deposit to clear means you are likely to overdraw frequently unless you balance your checkbook like its the 80s. So that extra $20? Youre likely to be paying them more than they pay you.Its not so surprising. Its a bank, and they want to make money. Obviously giving $20 a month isnt going to do that, so they look for ways to charge you for it.Also if you dont make a big enough direct deposit every month, you get charged.Direct deposit  not deposit. Maybe because I am working 3 seasonal jobs I didnt like that.The money goes into your savings account, too, meaning that you dont get it in your checking account, and you can  you guessed it  overdraw and they will make money off of it.I am not a perfect person when it comes to finances, but until my Santander account I had only overdrawn once in my life.In the 1.5 months I have had my Santander account, I over drew 3 times. When I finally closed my account yesterday, they of course either withdrew too much or some mystery charge that took a week to show up magically appeared, and somehow yesterday they couldnt see it, and I was charged an overdraw fee.I closed my account at 4 pm on Monday, yesterday close to the end of the work day.I was charged an overdraft fee the same day, but it was not on my account prior to going into the bank.I checked. So could they really not see those charges until now? Now I unfortunately have to go back and talk again to unhelpful tellers to find out why exactly I was charged.Ugh. Do not give this bank your money. Seriously, choose any other option. 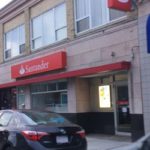