This is an archive of a consumer complaint published against Scott Yancey at DirtyScam.com-

Scott Yancey, sells his training on real estate to trap people into investing into his real estate scam. I joined his training in San Francisco and paid about $22,000 in total. In the training, the instructor, Tim Anderson, told us that we do not need to invest in million dollar homes. He even informed that the $500,000 was easily available for purchase and repair if homes through them. As per the CBS report, the average value of house in San Francisco is $925,000.As, Scott Yancey and team provides 20%-40% of the market value, they tend to offer a very low financing. There are other companies which offer 90% to sometimes 100%. Scott Yancey offers $500,000 which is much lower than the average value of homes at San Francisco.I paid $1,997 when the training started and they ask for remaining $18,997 if you wish to know the precise information on real estate investing. In short, they allow you to sit in their training with the first $1,997 investment and then will ask you for $18,997, if you wish to learn about their tactics which is not worthy of the amount they charge.At first, they provide the DVDs which quotes, dont worry if you do not have money. Later, when you ask them for the funding, they will ask you for a high paying job and to put 5%  10% of the total funding amount from their pocket.It would be shocking to know that they asked me to arrange the buyer and the seller at the same time to get the funding from them. My question is, Who will sell their house to Scott Yancey when they are getting much more money from another company.These goons are way more cleaver than you can expect and would brain wash you to make profit. Who pays such a big amount for training to get pennies in return? I did and many others as well. It was because they know how to lure people in investing.They make it sound so easy that no one can delay in paying them the rest of the amount for training. I want my refund that they are not ready to pay. I knew it would not be a cake walk to get money out of their pocket when they are the master players.Scott Yancey and his team of goons are smarter than you think and would take different turns to make you believe in what they say. Their promises are fake and illusionary. Since date, Scott Yancey and his firm have not made any great success which can prove the above claim incorrect.Scott Yancey is a fraud and would make you repent later. I am still struggling to get my money back which seems impossible. 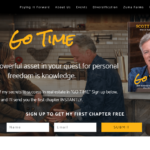