This is an archive of a consumer complaint published against Serra Toyota at DirtyScam.com-

The quality of Toyota vehicles is unquestionably high. The quality of service from Serra Toyota is unquestionably terrible. Let me count the ways:When getting a new car, I understandably visited numerous dealers to check out different makes/models, do a little comparison shopping.This was less than understandable to the thick-heads at Serra.I told them up front I was not making a decision that day, was not going to purchase a car that day.They insisted on wasting vast amounts of my time by having one salesman, manager et al after another enter to repeat giving me the hard sell, asking what it would take to get me to buy a car right then and there, have me repeat “nothing, Im not going to buy one today and them ignoring my answer.In retrospect, I should have just walked out, but I knew I might eventually settle on getting a Prius, so I didnt want to be rude.When I did eventually decide to buy one, my return visit was “I dont know if we can give you any sort of deal. after the previous “well do anything! how low do you want us to go?!? sales pitch.Then they told me the paperwork would be super quick to fill out, by which they meant over an hour, but in fairness they botched said paperwork by putting the wrong address on it.Then they botched putting the license plate on my new car. Then when I encountered an issue with my new car and called to ask about it, they had no clue.And dont forget that they set you up with Southeast Toyota Finance.Also just terrible  when calling to see why my payment hasnt been processed, they said it may have been forwarded to a different office but goodness, they had no way to find out.Or get me any information of any kind. Or have any way to talk to anyone who can find it out.Or register a complaint about anything, either on the phone or the website they told us to go to while on hold (the hold where they told me every 30 seconds how important customer satisfaction is to them).Seriously: avoid Serra Toyota. 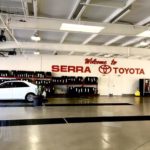