This is an archive of a consumer complaint published against Superior Tax Solutions at DirtyScam.com-

I called Superior Tax Solutions from the phone # showing in Google for Jackson Hewitt tax service near by my house, & I talked to Samantha Tazelaar without knowing theyre NOT Jackson Hewitt but Superior Tax Solutions since they dint tell me & I didnt double check on that because I trusted Google search.I called 2 times to make sure they could do tax return with amendment from 2017 that I needed to do for Energy Efficiency program affiliated with PACE program through E3 which is another bad company to deal with.Samantha said she knew how to do it & told to bring it to the office to look at it to make sure.So I went there & was surprised to find out its so crowded small office with so many people in there.I went into Samanthas room that she was sharing with another person, & its such a small room even for 1 person so that Samantha was barely able to walk to her desk.Samantha was talking very clearly & loud over & over that I could not get much return this year because of some reason with open door that everyone else could hear.After the meeting & another call, Samantha said she could do it for refund of the amount close to what I was told by another CPA to get refund from that program but I couldnt go to that CPA since his office is more than 1.5 hours away from my home without traffic.So I decided to do the tax with her this year, but she did not include direct deposit that I asked although I gave her all that information.I now found out she claimed very little money, much less than she told me for refund, & I havent received the money from IRS either.So I called her Wednesday to talk to her since she said she would be in the office Wed & Thurs only after tax season, but she was not in.I was told by the man who did not say nicely to email Samantha about the return problem.So I emailed Samantha last Wed night, & she had not returned email until today saying I was the one who didnt give her direct deposit information & she said I would get much less amount of money I would get from refund which I found out later thats the amount she claimed on Amendment which was not the amount she explained.I spent all the hours to make sure she could do the Amendment for this energy program & the amount that the other CPA was saying I could claim, & I even explained that to Samantha from the very beginning.Not only did Samantha liked to me, but she also made me a liar which makes me more mad about this service.I recommend this service to anyone, & Im sure I wont go to this place again or talk to these people again. 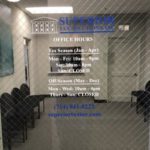