This is an archive of a consumer complaint published against Taxanista at DirtyScam.com-

Avoid doing business with Angela the “Taxanista if at all possible. My spouse got a new job in 2011 and we asked her how much we should each withhold from our paychecks.That we would limit our tax burden in 2012, since our combined salaries were going to go up substantially.Taxanista advised my spouse to declare “married 4.What she didnt take into account was my income, or the fact that we file jointly, which she shouldve known since she prepared our taxes.Because of this error, too little was deducted from my spouses paycheck, and now we owe $8K in taxes for 2012!Additionally, she retains assistants at tax time to help her prepare the returns.These assistants are not accountants, and are prone to multiple errors, as they failed to take any HSA or real estate tax deductions, as well as gave incorrect info regarding our mortgage interest deduction on our 2011 return.To top it off, Angela does not proof the returns, otherwise, she wouldve caught these errors.This is a very unprofessional accountant that you should avoid. 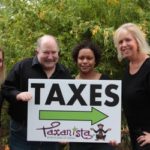