This is an archive of a consumer complaint published against The Tuttle Group at DirtyScam.com-

How The Tuttle Group got such good ratings is beyond me.They did my initial pre-approval in a timely fashion, but when it came time to compare rates, they just disappeared.Ron was short and borderline rude in his email response when I told him I wanted to compare rates.They never got back to me until I told my realtor their lack of a response and magically I got a phone call from his assistant.I asked if they ever created an estimate and she said Ron did.I then asked if it could be emailed to me so I could see it and she said she would have Ron send it over.Did he? No. A week later, still without an estimate, I got a phone call from his assistant asking to set up a meeting.Without me ever seeing the estimate, what are we going over!? Imaginary numbers pulled from the air? I shouldnt have to ask multiple times to get a copy of the estimate.If I agreed to those rates/numbers, I would have NO proof whatsoever.They were incredibly prompt in getting my private information and then disappeared.I would never do business with them. 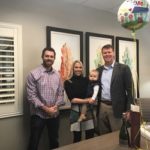