This is an archive of a consumer complaint published against Title Forward  Philadelphia at DirtyScam.com-

Weve used Title Forward  Philadelphia twice, and there wont be a third. First time  After nearly 10 months of waiting for our tax abatement paperwork to come through, we called the city of Philadelphia to find out Title Forward had misfiled our paperwork twice (once with the incorrect paperwork, and once with the correct paperwork, but incorrect account number), and had to re-file again.For something that should have taken 4-6 weeks, we waited 10 months.The entire time, we were led to believe that the delay was from the city; had we not called the city directly, we never would have known that the delay was caused by Title Forward.Second time  We explicitly requested to have my wifes name listed first on the deed (I know it doesnt make a difference legally, but we wanted it this way, and communicated this early on and throughout the process).On our end, we made sure all of the paperwork (agreement of sale, mortgage, etc.) had her name listed first. Despite this, Title Forward put her name second.Literally every document except the deed had her name listed first.Realizing it was their mistake, Title Forward did offer to correct the deed, but instead of preparing a new deed, they amended the existing one and re-filed a marked up copy (with text crossed out, and new text over-written).Instead of having us review the document first, they took it upon themselves to forge our initials onto it and re-file it.Overall, our experience has been that Title Forward has a lack of attention to detail, and unable to follow through with instructions. 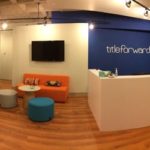