This is an archive of a consumer complaint published against Union Savings Bank at DirtyScam.com-

The practices and actions of Union Savings Bank are nothing any borrower should experience. Take my advice, stay away.Their low-interest rates and nominal closing fees in comparison to other lenders are attractive to individuals looking to borrow in the most cost effective manner.Their lending practices are immoral are profoundly illegal.My lending experience with Union Savings Bank was exceptionally problematic.The appraised value of my home was changed four times under what I believe was great pressure by the bank (illegal).As if getting to closing wasnt hard enough, fifteen minutes prior to entering the title agency for closing, I received a phone call from Union Savings Bank, regarding an “error in the final closing document and that it could require additional monies to close.The bank representative indicated that the numbers from the estimate and closing document were simply too far apart for them to be able to file the mortgage with Federal Housing Administration, U.S. Department of Housing and Urban Development.The lender indicated that the original closure document that I had received was incorrect and that the cost to close would be changing and I would need to issue a check to close.A difference of $2,063.91 among the closing disclosure documents.A Closing Disclosure must be received by the borrower at least three business days before closing.However, the newly issued closing statement was received 15 minutes after the closing was to start that morning.In a matter of minutes, Union Savings Bank inflated fees throughout the fee statement to increase the cash to close thereby achieving their goal of meeting the expectations and margin of errors as set forth by the Federal Government.The numbers the bank had presented me in the Closing Disclosure document were significantly off.I was required (per the bank) to issue a personal check in the amount of $1,483.46 to the title agency so that for regulatory purposes, the bank would be within their percentage of error when compared to the loan estimate.I was forced to buy an “optional insurance that I did not elect and was told I had to have the coverage for the banks numbers to meet government regulations.Union Savings Bank placed undue pressure on my realtor and me to sign and accept in full their conditions with no time to research or better understand them.They bullied the home builder and they forced my hand throughout the loan process.When I attempted to leave the bank and reenter the market for my mortgage needs, they made it impossible to do so by filing the appraisal with HUD.In doing so, I would have lost money in application fees, been met with higher interest rates from an uptick in the market, and still have been held to an appraisal amount that I believe was unfair.Additionally, I would have lost more time in the process of closing with a new lender for a closing that had already been delayed.At best, these actions and missteps by Union Savings Bank are unfair, unjust, and unwarranted in my lending experience as a consumer.The Mortgage process is stressful, take my advice, DO NOT DO business with Union, I promise its not worth saving a few bucks a year.I closed my loan in late with USB. 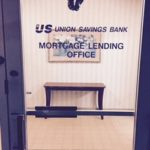