This is an archive of a consumer complaint published against United Finance Co  Hillsboro at DirtyScam.com-

United Finance Co  Hillsboro Is the worst. An interest rate of 29.99% that wasnt divulged to me at the dealership.He was so hung ho about making a sell he didnt do his job correctly.Not United Finances fault at all, and partially ours as well for not doing all the research, but had we known it was so high we would have moved on and not made the purchase.Two years into the jeep, the engine blows and I cant afford to fix it, nor is United Finance(a finance company) willing to do anything to help us get it in working order!Its been parked for months while we made the monthly payment and paid insurance on it.My work is no where near any public transportation so therefore I need a car.Again, a finance company unwilling to help a current, long term customer keep their vehicle.They hung us out to dry. I made the choice(terrifying) as it was to have United Finance take the jeep back.When I made the call, he said they would sell it at auction within 15 days and that we would then be responsible for the remainder of the balance. I fully accept that.Two days later we were served with court papers to appear in small claims court. This is crap!So I called United Finance to see what we do next.I was informed they never picked up the jeep, his words were “we wont get any money out of it , so why would we pick it up.I dont know, maybe to not be raping a family just trying to make it in this economy.We work hard and are paycheck to paycheck but we were making it.Now we have this daunting idea of having to go to court up against a finance company, who clearly knows how to bleed you dry.I would NEVER recommend United Finance to anyone for anything. 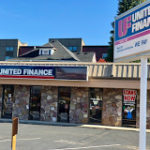