This is an archive of a consumer complaint published against United Security Financial at DirtyScam.com-

My mortgage was sold to United Security Financial for mortgage loan servicing. So far that has been okay but then again, the mortgage is paid on time.However, there is something shady going on here. I have been called several times by them to refinance my loan.They are using my phone number to sell products! Pissed me off as the only reason they have my number is because of the mortgage and I did not choose this company!Anyway, I was told that I would save $2-300 per monthI said given my current interest and the proposed interest rate, that was not possible.The guy says — well, I can see it on my screen. While he was on the phone, I went to an online mortgage calculator.Guess what? He was wrong. So, I said prove it in writing. Surprise! I didnt receive anything in writing.Then a loan officer calls me and I told her the same thing — PROVE IT IN WRITING!Never received anything in writing. Then a couple weeks later, I get a voicemail from the first guy asking me to call back to set up an appointment for my closing.Oh, hell no! I did not return the call. (Keep in mind, I also received several phone calls with no message left by them.)Then I got a phone call from the same loan officer who had the audacity to ask me if I received the documents.I told her I have received ZERO and said I was NOT interested and then promptly said — Goodbye. Do not call me again!In any case, if I were going to refinance, it would NOT be with United Security Financial!And quite frankly if it were possible and made financial sense to move my loan, Id do it in a heartbeat. Like I said, there is something shady going on here. Beware. 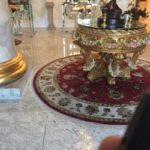