This is an archive of a consumer complaint published against Utah First Credit Union at DirtyScam.com-

I recommend my girlfriend to Utah First Credit Union , bad idea.They gave her a courtesy Pay limit of $3500 in overdraft she used it two times in two months and paid it back on time each time.Then came the day she went to IKEA to get a bed it was right before Christmas she was standing in a very long line when she got to the checkout her card was declined along with the embarrassment she was confused as to why.She went to the bank the next day and a lady came down from upstairs to address her concerns and told her that she was not able to use the account in the way that she was using it and they determined whether or not her use of the account was appropriate and that if she behaved they would restore access to her account full access in six months.I didnt understand it myself until I started reading reviews from multiple sources after which I learned some things myself and one is that you should never do business with Utah first credit union and the people that have had accounts there have horror stories some like mine some worse Im not telling you what to do Im not suggesting that you dont do business with Utah first credit union however I would suggest that you read some reviews do your due diligence before doing business with Utah first credit union because theyre not professional ,they have opened and closed more bank locations than I can count I get the feeling that they are making up their policy as they go.BEWARE!! 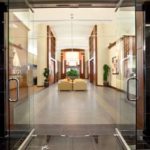