This is an archive of a consumer complaint published against Wayfair at DirtyScam.com-

If you have fallen for the fast and free delivery as advertised by Wayfair, do not be. This company is full of lies. You will never be given the time and service you deserve after ordering from Wayfair. I am so disappointed that it is difficult to suffice my experience here. These guys made me frustrated while I am a cool person. I have never in my life have taken granted for, especially when I am the customer. This company has no manners. And, the people who work here are scammers. These guys have no courtesy to help the customers and make things right.Without stretching things any further, let me explain my worse experience with this company. I ordered a bunk bed and kitchen pantry. I even paid for assembly. The order was made with fill payment and there was nothing they said I would incur after the order was received. I paid for assembly. So, there was no need for any extra work that I would be needing.The order details said that the products would reach me within 15 days. This was a lot of time. But, I thought it is okay to wait for such great looking stuffs. I did not know that their quality of products is pathetic. I only came to know that once I received the products. The things is, I am not someone who usually point every little thing to try to find mistakes. But the products they sent were shouting of their irresponsible behaviour.I received the first item that was the bunk bed on 25th day after the order. That was 10 days late and the kitchen pantry wasnt delivered by then as well. The tracking details showed that the product was shipped but nothing more than that. The bunk bed was supposed to reach us between 10 to 2 in the morning. However, it reached at 6 in the evening. I was not around. My husband was at home. However, he is paralysed and cannot move much. He did answer to them and asked them to assemble the bed.These guys told that they are not supposed to do that. They were not informed that the payment of assembly was made. My husband had to call the customer care which took lifetime to respond. They did not have much information on that too. So, these guys, did not even unpacked the parts and left. Usually, after delivering the items, companies unpack and clear the place before leaving. Nothing of such thing ever happened.So, when I reached home, I had to ask my friends to help me assemble the bed together on the weekends. This was very frustrating. I had paid extra amount only because I work two jobs and I do not have time. My husband is bed ridden and cannot help me either.Moving on, the kitchen pantry arrived after another 15 days. That was around 25 days late. The guys at least delivered the item on time while I was at home. They said that they had no notification about the assembly of the items. I called the customer care again and they had sorted few things by then, I guess. They confirmed to the shipping guy that they could assemble the parts.However, when they started to do that, halfway through they realized that few parts were missing. They asked me to call the customer care and ask for the missed parts. I did as they said. The customer care wont answer easily. I asked for a refund as I did not need anything from a company that is so irresponsible. Also, the quality of the products wasnt that great. The side of the bed was dented, and it wasnt durable at all. The same case was with the kitchen pantry.When I asked to return the product, they said that they would charge for shipping and handling. And, because I paid for assembly, that wont be returned. They also informed that returning the items would be a bad deal. Instead, they suggested to get the missed parts at no extra cost.I was also tired of everything and when they promised that the parts would be sent in three days, I agreed. I did not know that after so much of harassment, they would again send the items late. I received the parts after a week. Just because of two or three parts, my entire house looked messed up with unfinished work.The guys who came to deliver the parts rejected to help me when I asked them to assemble the kitchen pantry. I had to call the customer care and they said that they had already helped once to assemble the parts for what I paid. This is unacceptable. They left me again in the middle of nowhere. I had to ask my friends to help me again.I have been working like hell to get everything sorted. These people wont help me much. I have realized that these guys are the worst when it comes to provide the customer service to their clients. Moreover, the company does not care about what shipping the right products to their customers. I had to call them so many times for the deliveries as well. They were late and never on time.Above all, it takes hours to reach to a person when calling the customer care number. They have no system in place. It only implies that these guys do not care about time and money of their customers. Once they receive their money, their job is done. These guys are rude and would disconnect the call on their own. They wont wait for you to approve the resolution was provided. They would tell you their part and hung up.I have been ordering online for so long, but never had been treated this way. Do not order from this company. Even if the products look great on the website, they are worse. 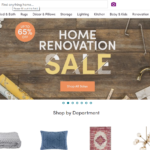