This is an archive of a consumer complaint published against Westside Village Nursing Center at DirtyScam.com-

My grandfather was transferred from ICU to Westside Village Nursing Center.Westside Village Nursing Center is grossly and dangerously understaffed and this has been demonstrated time and time again.The severe neglect started happening within less than 24 hours of him being there.They do not have accommodations for morbidly obese patients, or dimension patients.They do not transport large people.We had to pay for an ambulance ride because they did not have an extra wide wheelchair.The neglect started within 24 hours of him staying there.He pushed the assistance call button attached to his bed to request help to get up and go to the bathroom for a bowel movement.A staff member came in and said she would be right back with someone to help him.She never came back. He had an accident in the bed because they neglected his needs.Then, he was forced to sit in his own fecal matter for over 3 hours, and they even served him his lunch and gave him no choice but to eat his lunch while sitting in his own fecies.Again, 3 hours. (He is fighting a serious ecoli infection which is why he ended up in the IUC in the first place.)3 hours later a speech therapist came to evaluate him and he told her what what had happened and she went to get someone right away to wash him and clean it up.She said that she would tell the administrator on Monday. This was during Easter weekend.As I checked on him a few times over the weekend he reported to me that it keeps happening despite promised it would never happen again.Monday I called and spoke to the director of nursing and the director of social services there at the facility and they said they dropped the ball and they were understaffed and assured me and my grandfather it would not happen again.When I spoke to him again today he told me it keeps happening.That they are so understaffed nobody comes when he pushes his assistance button.So he cant get the help he needs like he did in the hospital and at the other facility we had been in in the past.Today, when he went to pay the barber for his haircut, he opened his wallet to be completely empty.Someone on the staff STOLE HIS MONEY!!!! They had to replace the cash I counted out just 3 days ago during his move-in inventory.Also, the food is terrible and he can hardly tolerate eating it. There are no choices.Only one meal. And if you dont like it, you have to go hungry. Or just eat your dessert.Also, nobody welcomed me. Nobody told me about the codes to get in and out of the building.Nobody warned me of that. No hand outs or pamphlets on information.This place neglects my family member. This place is grossly understaffed.I will never allow them to take care of my loved ones and I only write this review so perhaps another elderly person wont have to suffer from neglect like this.Next step is to call my attorney. And the health department. 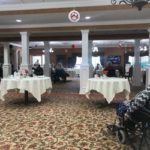