This is an archive of a consumer complaint published against Zulily at DirtyScam.com-

I have ordered from Zulily many times in the past. I have ordered enough times, that I have almost got used to the mistakes and inaccuracies that it makes and has on its websites. I would like to share that with you so that if you could find a cure, you could write to me about it.1)    The products that they display are not much accurate:The items are hit and miss. Although after checking one time, I compared their prices with other online stores and Zulily claimed. Those that have a big discount on Zulily, on any particular item. But I always fail at this attempt of mine, they dont! Some of the prices that they said have big “discount is actually the original price from other online stores. I ordered several items from this website but one thing I really dont like about it is the length of their delivery process. I even wrote to the customer service to say that this is set up like that because they get it from different merchants and to get the “discounted price it has to do through the process or something hence, the long delivery. Like I said some of the items that were supposed to be on sale are just the same price from the other online stores that are not discounted. Until now, Im waiting for the two orders that have already been over 3 weeks going on 4 and I ordered this for a birthday present but it looks like its not going to make it on time. Very disappointed. I will be canceling my account once I receive all my orders. 2)    Despicable business dealings!Despicable business dealings!! I ordered 17 baby items. Three weeks after the last 13 items should have been shipped not one notice/email from the company so I finally called them. Before I called, I checked the site and 11 of the items that I was waiting for were still listed for sale. I called and the Rep canceled the order and then told me to re-order the items still listed. I said what? Why should I do that? That made absolutely ZERO sense to me! She had no answers or any reasons as to why my order never shipped or why I had never even been sent any emails keeping me updated. I used to use them all the time with no problems but stopped 6yrs ago when my great-nephew went back to my niece. I see just how far down this company has gone! Customers are not in their interest. The reps attitude was as if I was inconveniencing her verses I was the one who had been majorly inconvenienced!! I am still waiting for my refund that was to be in my bank within 72hrs and it is now well over a week. I will be contacting my bank! They dont deserve the one star, but I had to click on one. An Amazon executive took over As Zulilys President in 2018, but it doesnt seem to have helped them what so ever! 3)    Cheaply made clothingOrdered several rain-boots that were super cute and semi-decent quality but everything else we ordered was complete junk! Weird plastic-like material with seams coming apart. Looked like it was poorly made in another country but the high price tag did not match up. Huge waste of money. I would steer clear if you dont want to waste your money. 4)    Most things are shipped from ChinaMost things are shipped from China, which is too bad. Ordering is always like roulette- or a box of chocolates. You never know what youll get. 4 out of 10 things I ordered are made for small Asian children. If a product says “ships in 10 days (or more), I advise you do not order. Returning costs more than the item usually. 5)    REFUND with Zulily is a nightmareFor my refund with Zulily is nightmare for my order which I have not received. After waiting for a long time, so many times I called Zulily and almost every time customer service directed me to a different offices. Once it even went to UPS, then to USPS and it just wasnt successful. I called again to a center and talked with many different reps. One of them who told me before that it was a fault from their end and that they had lost the package, I waited as she told me to and then even after waiting I got nothing at all! She said, she would file an investigation, but she didnt give me an investigation number. Due to which every time I call, a different rep picks it up and demands for an investigation number, I am just not able to give it. I feel that they do these purposely. They are not interested in giving refunds to people for lost packages. After all these experiences with Zulily, I recommend people to not opt for the service that they provide and to beware of the company. They are not what the words on their websites say. Neither are they what the pictures on their website indicate. They are frauds. They love to cheat people and harass them purposely. In the name of providing service, all they mean to do is, to rip people off the money that they have and give them nothing in return. I couldnt save my money, these many times, because I did not have a review as such to warn me. As soon as I came to know, that one could write and read the review to be saved from the fraud that happens, I am writing this one save you people. Please do not fall for their advertising traps, they might even state to offer you a discount and cheaper service. But in the end, you wont even receive a service. They will take your money and flee away with it. 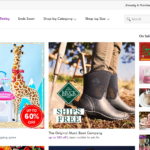